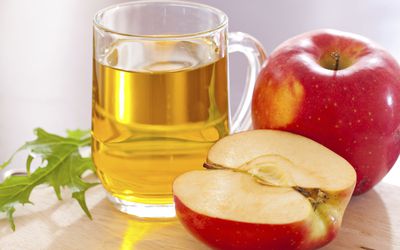 Apple cider vinegar is one of the oldest, most powerful, healing home remedies imaginable for allergies.

Apple cider vinegar is one of the most important remedies in healing the body if you can get over the taste. It has a number of reported uses including a complete relief of pollen, food, pet allergies and sinus infections.

If you live in a highly polluted area like Los Angeles where allergies and sinus infections are rampant, your system may better balance itself with a small dose of apple cider vinegar each day.
Apple cider vinegar in itself is alkaline because of its “ash” content, which means if the apple cider vinegar was burned, what is left over becomes ash. When you check for the pH of that ash and dissolve it with water, the content is alkaline.

Whenever our body digests anything, it undergoes oxidation, which is similar to burning. The end result is that you can determine whether the end product was alkaline or acid.

Apple cider vinegar has fungal, bacterial and viral properties, primarily coming from the malic acid and acetic acid portion of the vinegar.

Apple cider vinegar acts as a buffer for the body because of the acetic acid reacts with base or acid compounds to form an acetate.

This, therefore, renders them chemically bio-available for the body’s utilization. Additionally, apple cider vinegar can reduce the toxicity of certain compounds by converting the toxin into an acetate compound which is less toxic.

This is why they are ideal for insect bites and certain skin allergies. While apple cider vinegar is considered alkaline, chemically pure vinegar, it is neither acid nor basic forming as it leaves no ash as the entire portion when burned evaporates completely.

Any part of the body can be involved in allergic reactions. The most common areas include the nose and chest with symptoms such as hay fever, rhinitis or asthma although the skin and eyes also can show symptoms.